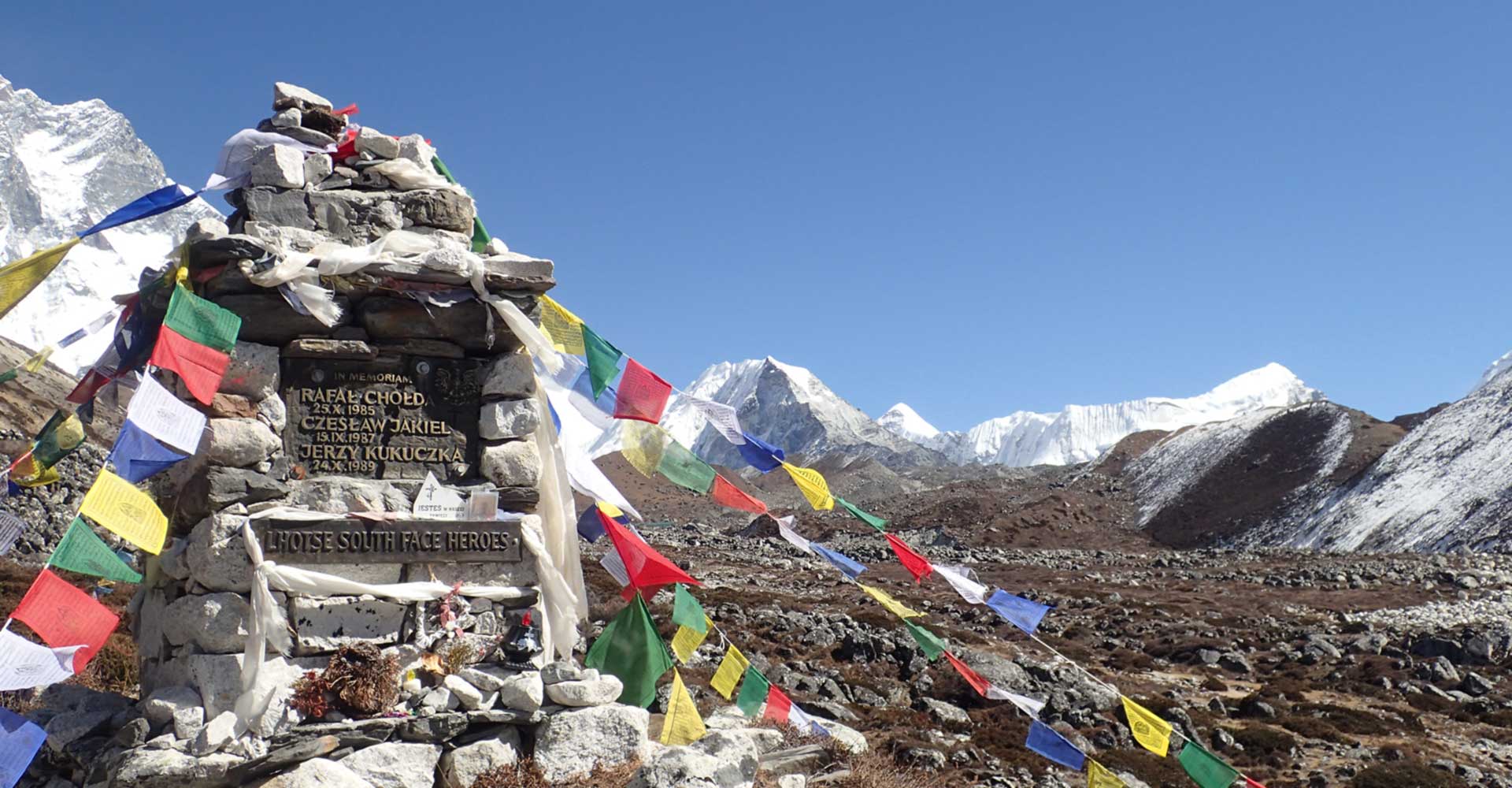 The famous trekking route here is to Everest Base Camp (5,364m). The main reason is that we can see Mount Everest from this route of course. But to see how the Sherpa people, their culture, and how they live in the harsh Khumbu area is another point of interest.

Himalaya is the tallest mountain range in the world that passes through China, Myanmar, Bhutan, India, Nepal, and continues to the highland of Pakistan. It’s so high that it cut through the death zone, where the level of oxygen is so low that nothing could live there. All tallest mountains in the world are located in the Himalaya. The highest is Mount Everest (8,848m). Because of it, Himalaya became the most popular destination for climbers, even naturalist and artist who came to feel the exoticism of the mountains. One of the most famous parts is Nepal’s Himalaya. Thousands of people came here every year, just for trekking or even climbing especially Mount Everest. The famous trekking route here is to Everest Base Camp (5,364m). The main reason is that we can see Mount Everest from this route of course. But to see how the Sherpa people, their culture, and how they live in the harsh Khumbu area is another point of interest. The trek starts from Lukla. From here, it’s 10 more days to Everest Base Camp. Just before arriving at Base Camp, we can climb to the highest point of this trekking route called Kalapattar (5,545m). Where we could see Mount Everest from near with our own eyes. Many photographers came up here in the afternoon to take a really cool picture of the mountain. The best time to go trekking is in May, the season of climbing Mount Everest, so we can see the condition in Everest Base Camp when the climbing activity is on the move.

DAY 1
Fly to Kathmandu Arriving in Kathmandu. Transfer to hotel
DAY 2
Kathmandu Gear check in the morning and if necessary, you can go shopping in Thamel to complete your gear list. Sightseeing in Kathmandu and after that final packing.
DAY 3
Kathmandu-Lukla-Phakding Fly to Lukla and then start trekking for 3 hours to Phakding (2,640m). We will walk at the side of Dudh Koshi River with a view of Mount Kusum Kangguru (6,367m). On the way, we can see porters with a very heavy load. Each porter sometimes could carry even heavier then his own weight. There’s also an animal carrier like Yak or Zopkio, the endemic animal of Himalaya region. Zopkio is a mix between Yak and cow, they usually used at lower part of this mountains (below 4,000m). We will be passing a lot of ‘Mani Stone’ along the way. It’s a pile of stone that have writings on it. It is a prayer meant to bring good luck and safety along the way. Stay in lodge.
DAY 4
Phakding-Namche Bazaar We continue our journey to Namche Bazaar (3,440m) for about 6-7 hours. On halfway to Namche, we will enter Sagarmatha National Park signed by a gate and office which we need to register. Before Namche, we will cross the famous Edmund Hillary bridge which is long and very high above the river. After that, the trek will go uphill quite steep and elevation gain of 600 m. Namche was a place where Nepalese people and Tibetan people meet and do some trading. We can still see it now but only in some particular day. Besides that, there’s a lot of store here in Namche. From grocery and merchandise store to outdoors equipment store, book store, money changer, and even bakery and bar.
DAY 5
Acclimatization day For acclimatization, we will go uphill to Shyangboche (3,720m) with a magnificent view of the Himalayan Range and also a complete view of Namche Bazaar. Then, we will go further up to Everest View Hotel at 3,800m. Stay there for a while to acclimatize before going back to Namche.
DAY 6
Namche Bazaar-Tyangboche Today we continue to Tengboche/Tyangboche (3,860m). Going down until Tesing (3,380m), crossing Dudh Koshi again to Phunki Tenga (3,250m). Here, we’ll rest while having some lunch before another demanding uphill route. Tengboche located on the top of the ridge. The elevation difference from Phunki Tenga is 500 m. The route will be steep and dusty. We can see the famous temple of Tengboche and if we got permission or the temple is open for public, we can get inside. Stay overnight here.
DAY 7
Tyangboche-Dingboche We will be trekking above 4,000 m from today. 5 hours walk to Dingboche (4,260m). After Tengboche, we will be passing a nice and cool Rhododendron forest. This is the last tree we can see along the trek. On the way, we will pass Pangboche. Usually people who will climb Everest or another mountain in the area will stop here for a ceremony and get blessing from the monk. After that, continue to Dingboche through Shomare, Orsho, and Samso Ogma. We will have lunch at one of those villages. Dingboche is quite a big village with a nice facility like Internet shop.
DAY 8
Acclimatization day Acclimatization day. We will climb to another ridge with heights of 4,70 m called Chubejung Kharka. There’s a Gompa there called Nangkhartsang, usually used for meditation by many monks from Tengboche. If the weather is good, we can see Mount Makalu (8,463m) from that point.
DAY 9
Dingboche-Lobuche From Dingboche, we’re going to Lobuche (4,930m) for about 5.5 hours. Passing the side of Mount Nangkhartsang. After 2 hours, we will arrive at Dughla (4,620m). Dughla is just like a rest area, which there are only three houses there. We can rest for a while before passing Thokla Pass that was the first part of Khumbu Glacier. The route is going a little bit uphill and at the top of it was many memorial stone for climbers and Sherpa who died on Everest. The famous one is Scott Fischer memorial that died in 1996 big disaster. Not far from Thokla Pass is Khumbu Glacier and we will pass the left side of it to get to Lobuche.
DAY 10
Lobuche-Gorakshep-Kalapatthar Today is the first time we passed the elevation of 5,000 m, from Lobuche to Gorakshep (5,140m). The distance is not too far, but because of the thin air, walking feels a little bit heavier. And we will walk slowly for good acclimatization. The trek going through Lobuche Pass, passing some moraine. Changri Shar Glacier and Changri Nup Glacier. Mount Nuptse (7,861m), Lho-la (6,026m), and Khumbutse (6,665m) will be in front of us along the way. Trekking to Gorakshep will take 3.5 hours. We’ll have lunch at Gorakshep. And in the afternoon, we’ll climb Kalapatthar (5,545m). The time needed for climbing the highest point of this trekking and back is 4.5 hours. This time, we can see Everest and Lhotse from near. Many people climb here to take a picture of Himalaya range in the afternoon, where the sun lights straight to Mount Everest. After enjoying the stunning view here, we go back to Gorakshep and stay overnight there.
DAY 11
Gorakshep-Everest Base Camp After breakfast, we continue to the last destination of this trip, Everest Base Camp (5,364m). Another 3 hours walking through Khumbu Glacier. In the high season, Everest Base Camp will be even more crowded then Gorakshep. The Khumbu Glacier is full with climbers’ tent. We will see around Everest Base Camp. Enjoy the time reaching there. After that, go back to Gorakshep and stay overnight.
DAY 12
Gorakshep-Periche Trekking back to Periche. Periche is on the other side of Dingboche. Stay in lodge.
DAY 13
Periche-Namche Bazaar Trekking back to Namche Bazaar. Stay in lodge.
DAY 14
Namche Bazaar-Lukla Trekking back to Lukla. Stay in lodge.
DAY 15
Lukla-Kathmandu Fly back to Kathmandu in the morning. You can take another sightseeing tour as an addition or just wandering around Thamel for shopping.
DAY 16
Fly back home Fly back home. End of trip.

For this trek, you need to be very fit. It’s not only because of long trek, but also about the altitude. Go weekend hiking regularly will be the best training. It can be started with 8 km round trip hike with roughly 6kg pack, ascending and descending 600m, in less than 2.5 hours. The aim is to ascend 900m carrying an average pack of 10 kg in 3 hours. To reach it, try to increase the difficulty of your training in some way, either by adding weight to your pack (no more than 10 percent per week) or by completing the hike in a shorter amount of time. In addition, you can do running two to three times a week for 45 minutes to an hour per session. Running on a route that have elevation gain will be a lot better, or use treadmill if there’s no such terrain in your hometown. You can change one of your running sessions in a week with cycling or swimming and especially you need to do also stair climbing with at least 10kg pack. It will be a good cross training. Besides that, muscle training is advisable. Strengthen your upper and lower body muscle, as well core muscle. You can do it at the gym or do your own set of push-ups, sit-ups, pull-ups, plank, etc. Training should be focus on cardiovascular because it can help to deal with the altitude. The capability to acclimatized are different for each person. So, building up your fitness even more will not be a waste. Just make sure you don’t injure yourself by overtraining and always have enough rest. Train 6 month before will increase the rate of success. But if you don’t have that much time, train at least 3 months before.